Welcome, latest news from the Päwl Corporation is that the originals and duplicates have been eliminating one another. These two factions will eventually come to peace…or not. Only time will tell. Check the microfiche…

Hanley is sent back to the 3rd dimension to capture his duplicate version 5.3. If he’s not successful he will disintegrate…

Production images below by Bradford Bishop:

Production stills below.  All shot by Bradford Bishop. 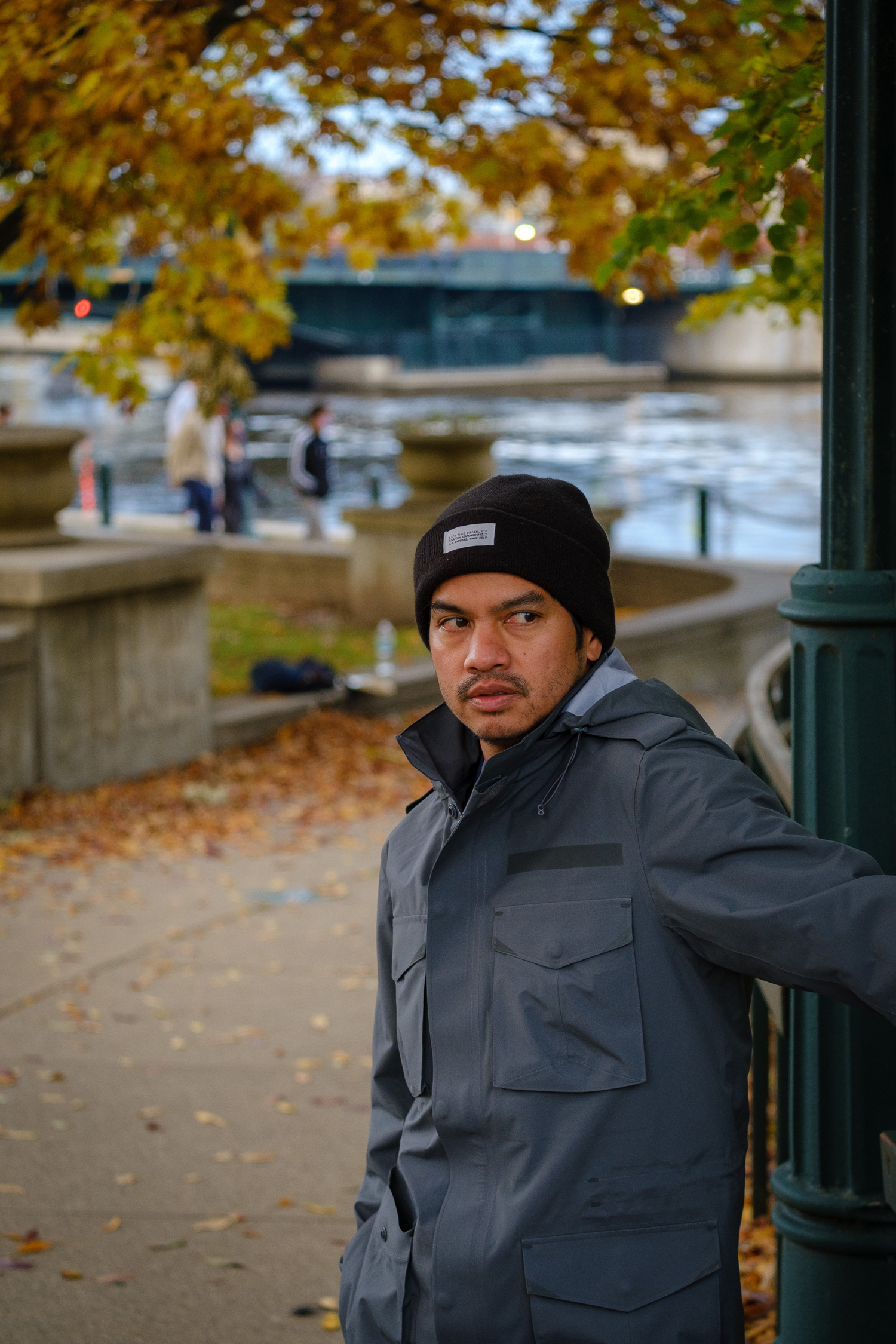 Gabe, on the set. 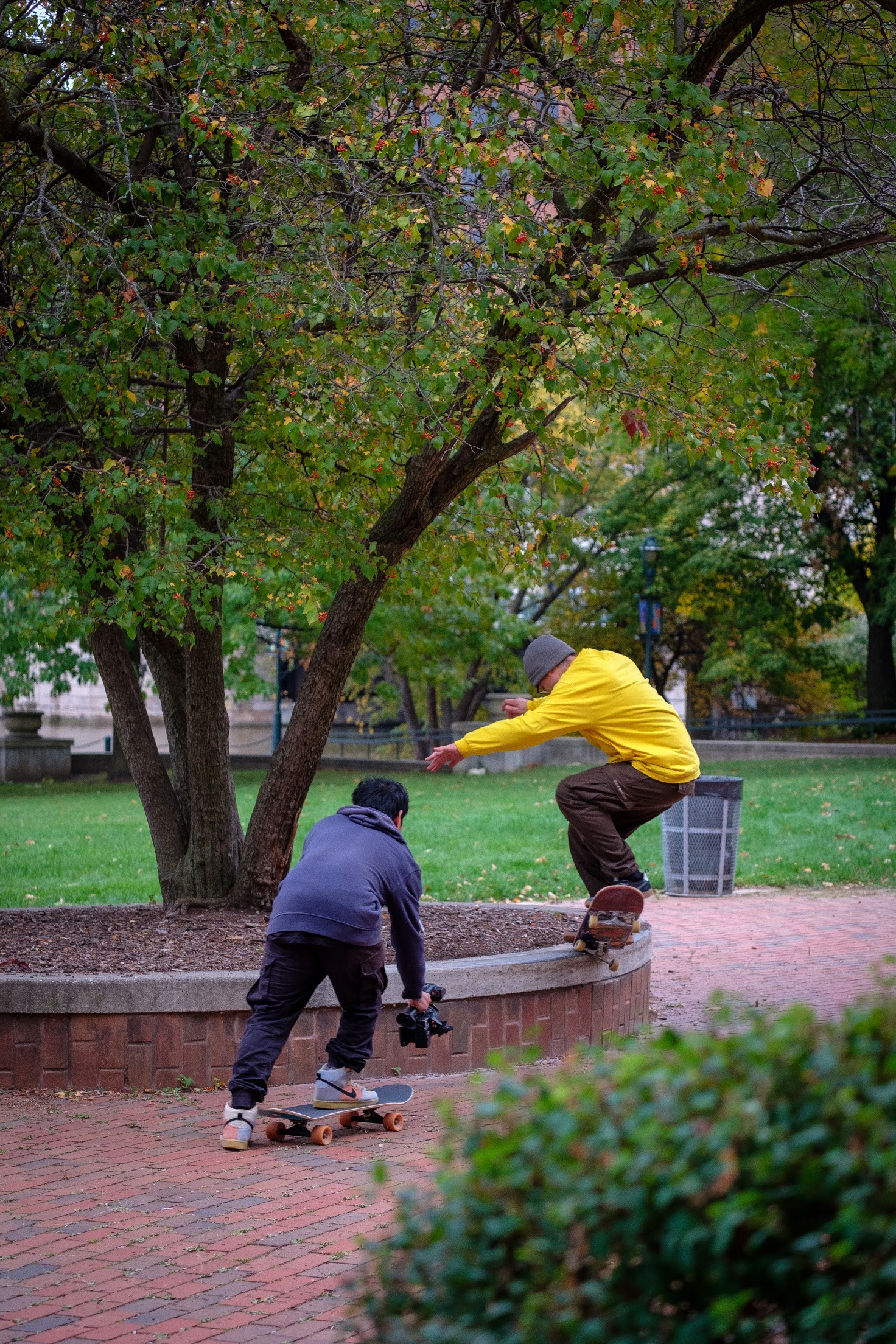 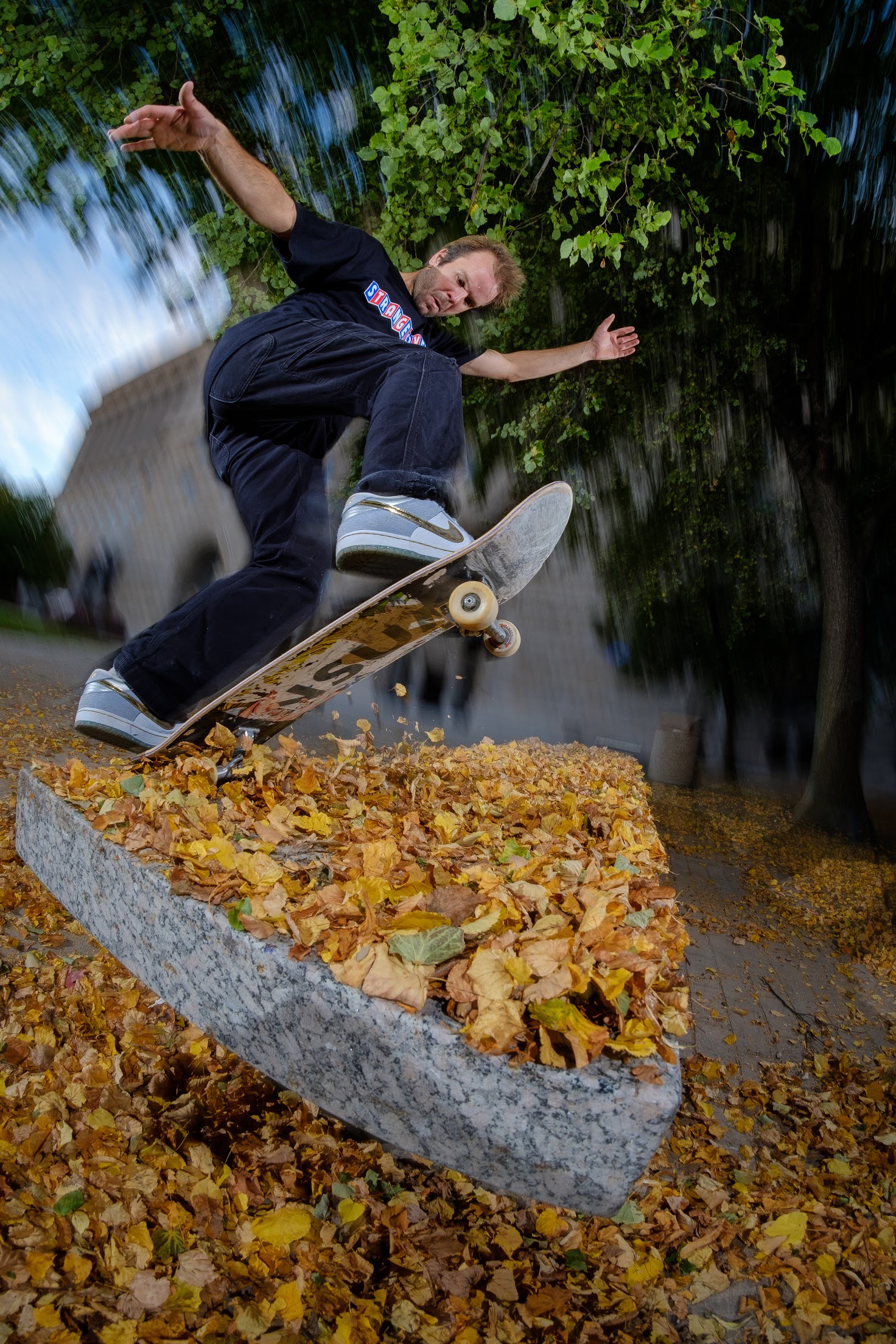 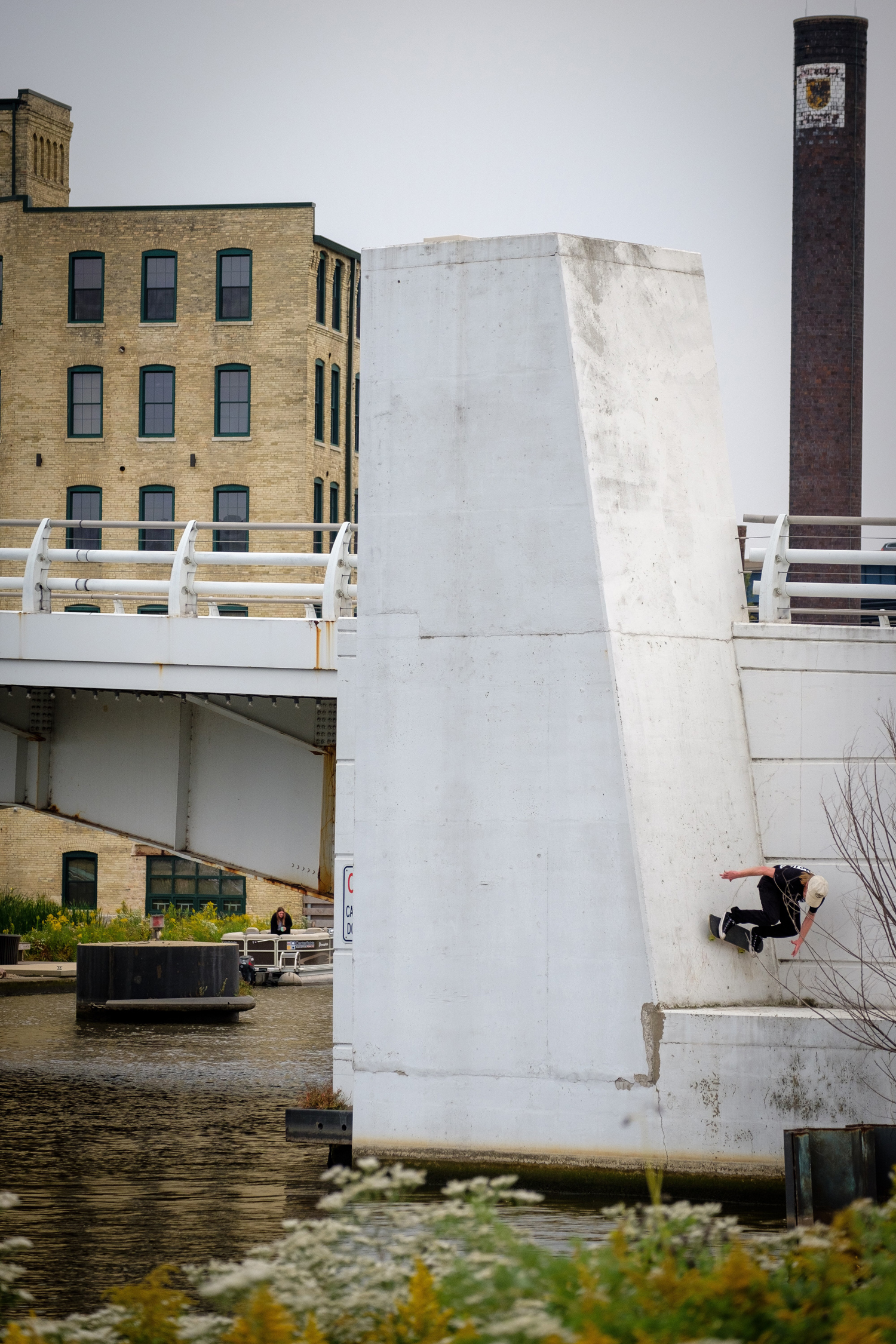 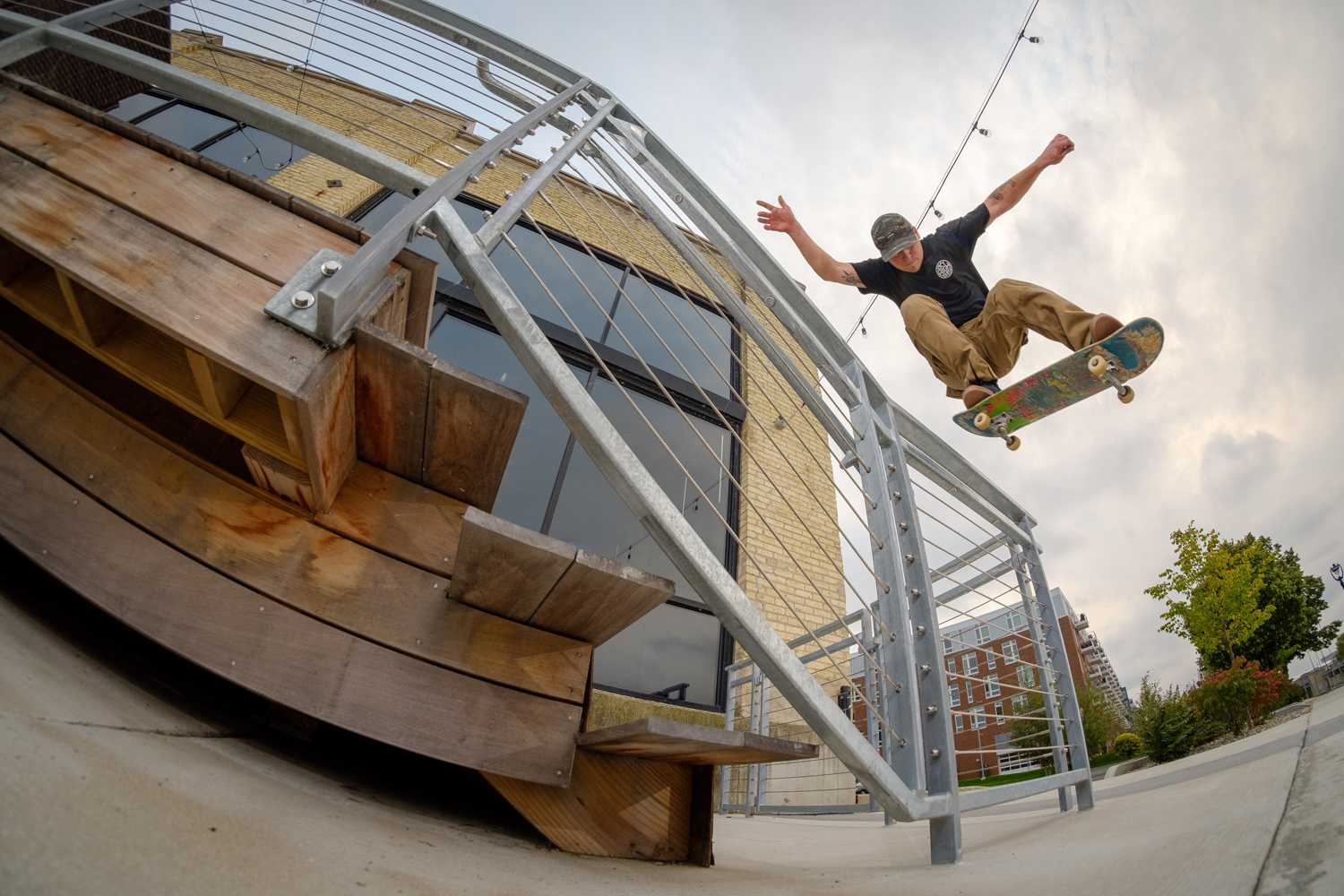 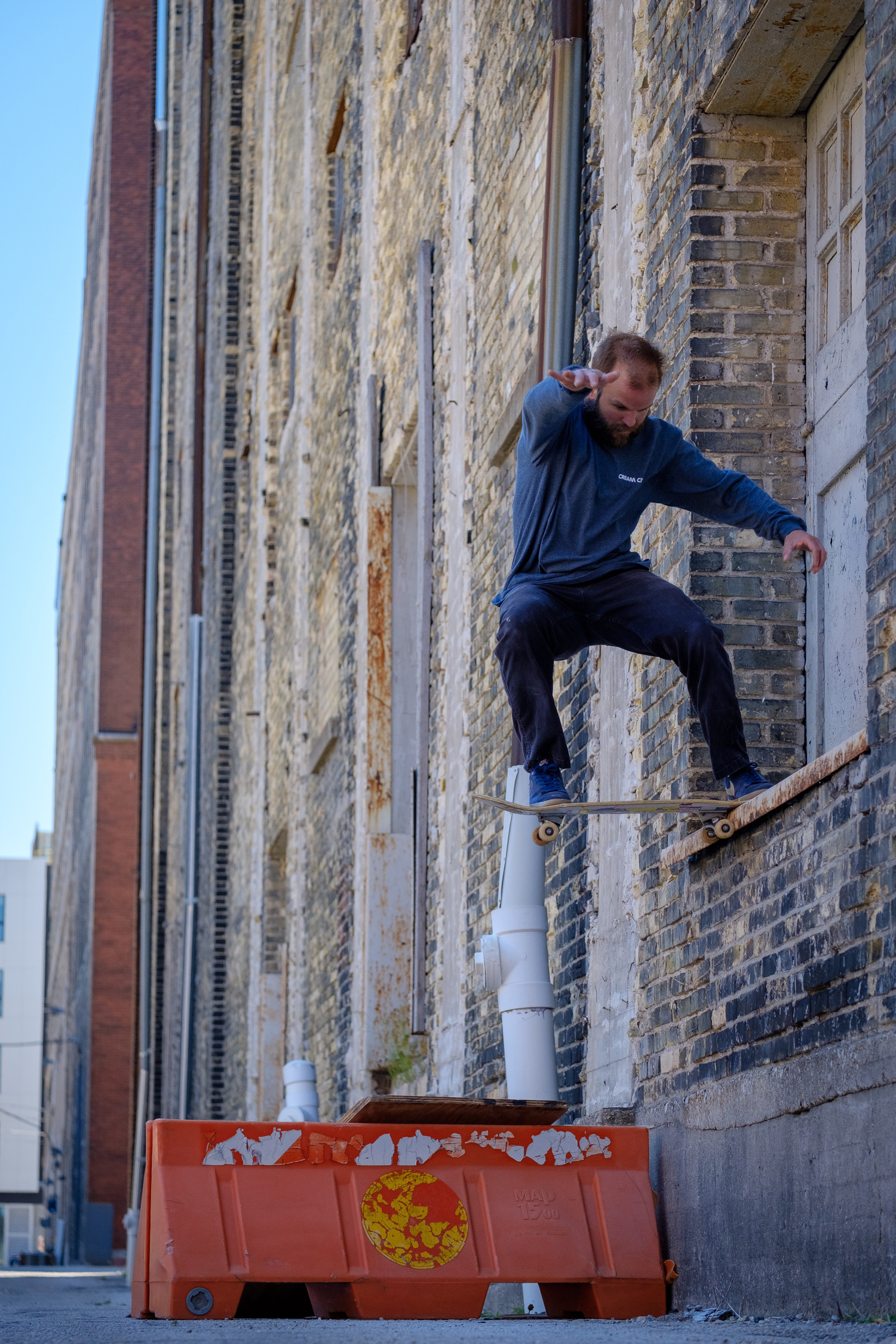 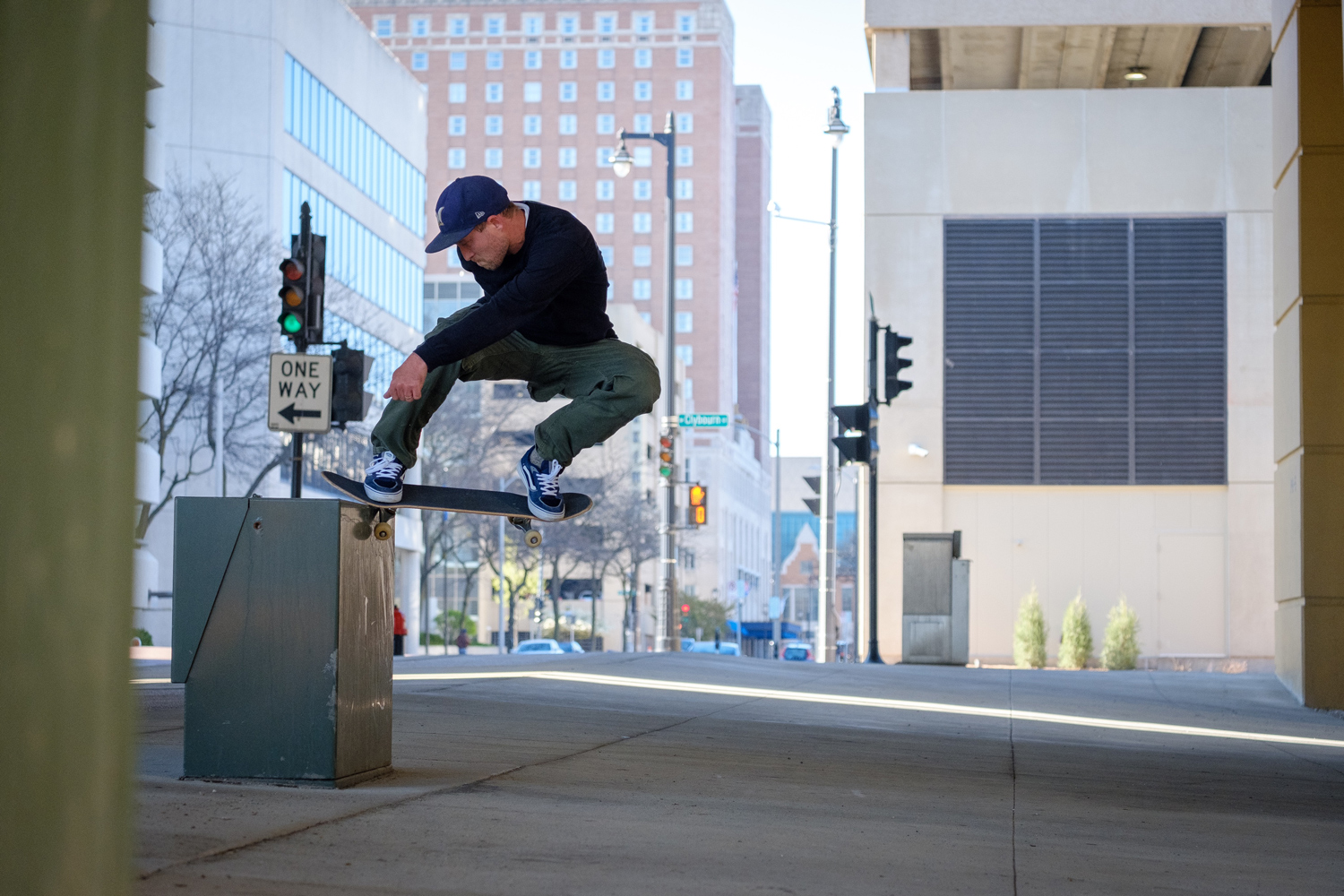 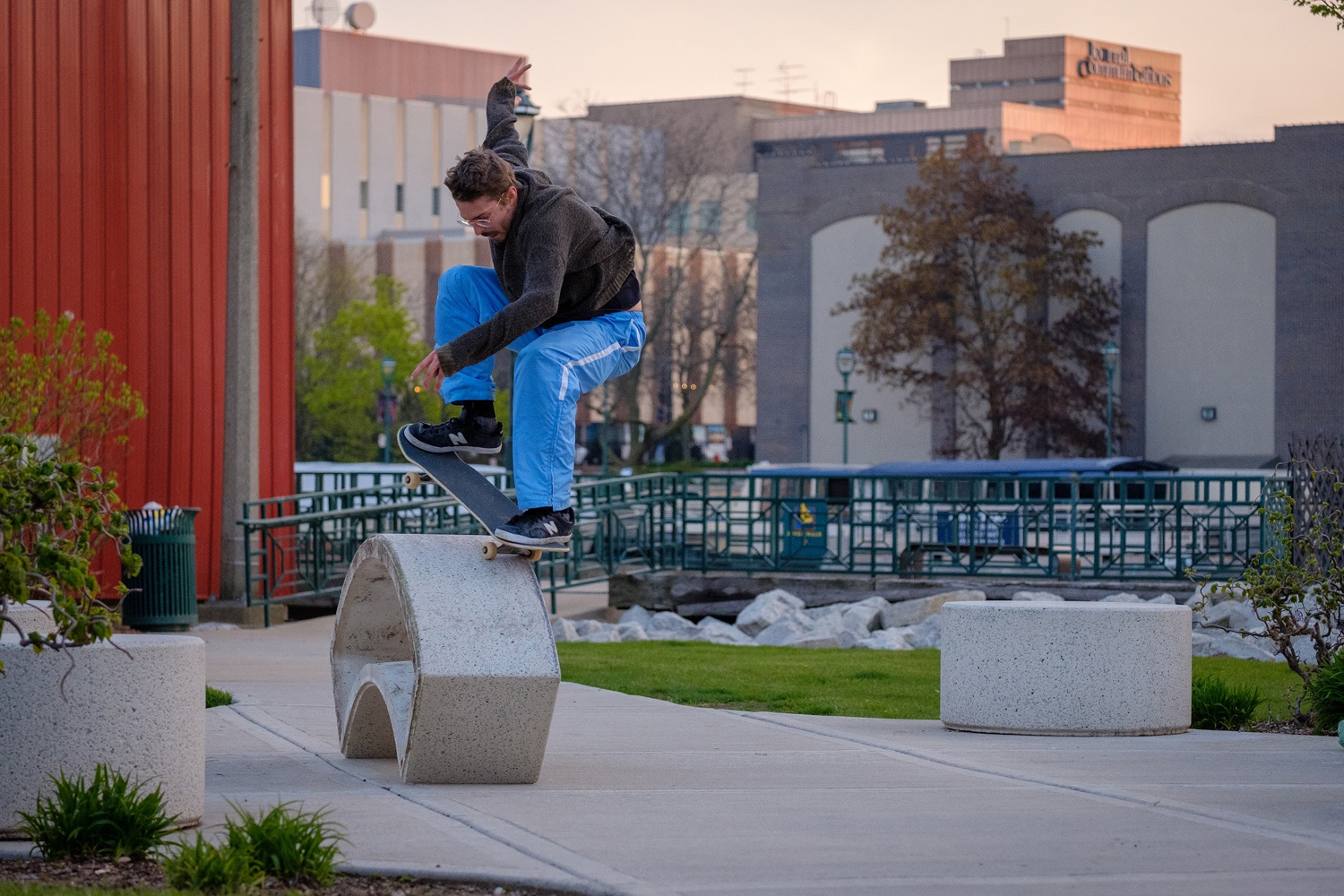 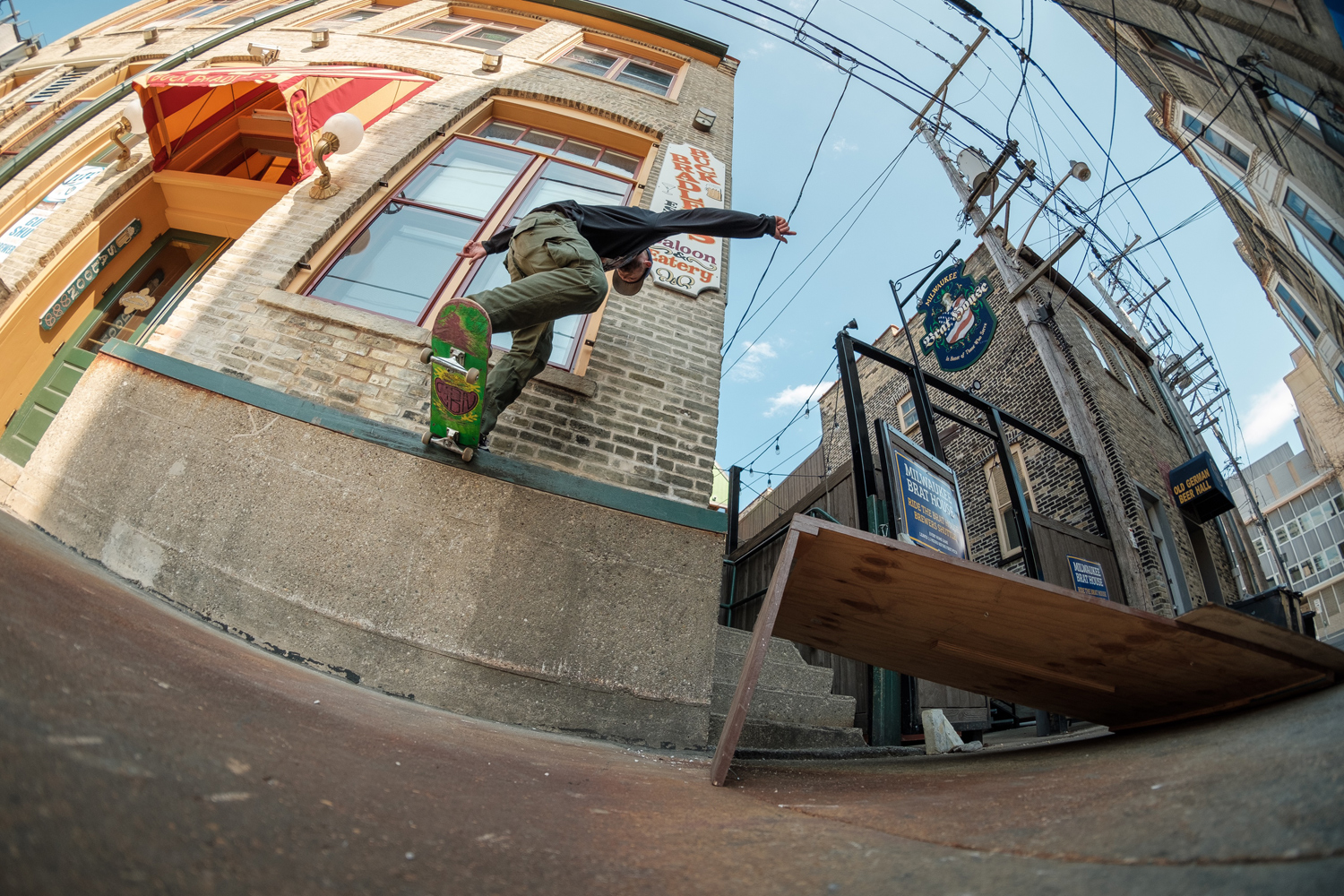 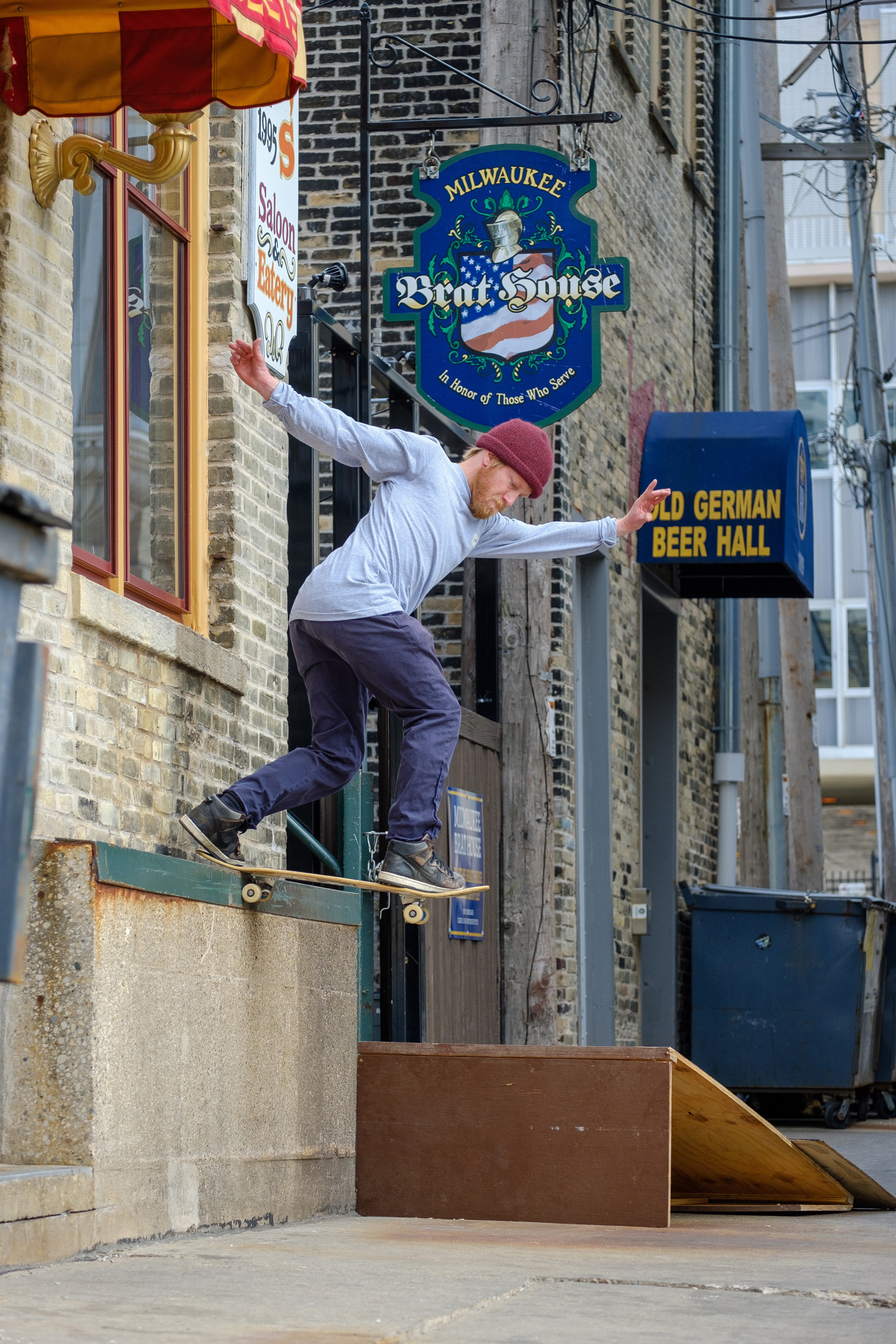 Last video I made was ‘Delirium Tremens’ and I never thought I would make another one until I got a new camera, the Panasonic AG-AC30 about a year ago. It reminded me of a VX but way lighter, HD, a built in light, and memory cards instead of tapes. The stoke and inspiration came back and I made a few Cream City clips. When the weather was looking up I started documenting along with Max Murphy (who quickly picked up the filming bug) some of our skate sessions with the homies. Was originally intended to make a quick vid (10-15 min, no premiere) and finish by Halloween but Josh decided to make ‘Wazpz.’ We agreed that if he premiered his video I would also. Harald Reynolds was also in the process of making a video and we all agreed to have a triple feature at Sky High in December. The premiere was a success! A lot of homies and new viewers showed up and everyone had a joyous time! Well, here it is ‘Bolsa Video’

Bolsa Video (may I help you?) from Gabe Chan on Vimeo.

“Skating is way easier than filming”

What turned out to be a simple edit of Cream City footage that I didn’t use and/or “alternate” angles from ‘Betrayed in the Octagon’ turned out to be an extended edit because of old man winter’s wrath upon Milwaukee during February/Early March. Even an attempted sesh in the Lower Level/Room could not beat the elements of rain, snow, and sleet. But we are the “resistance fighters.” Fortunately, the greatest place on Earth provides us with a place to chill, session, have fun, and/or combat mother nature’s frigid anger. We are forever grateful Bill.

Doublecrossed Inside an 8 sided Polygon from Gabe Chan on Vimeo.

*Triva/goofs: Hank filmed a lot with the new Panasonic because of my dumb ass taking forever to land a trick and according to him “skating is easier than filming.” Either way, Hank has filming and skating wired. Josh did his first back heel and his thoughts were “it felt weird.” And for some reason Josh wanted to go to this new Japanese Mega Arcade at Southridge during the day….during the DAY?! In my opinion you gotta skate during the day and hit the arcade at night. Speaking of arcades, during the Street Fighter/Mortal Kombat days my cousin and I would rarely go during the day…night time is where the “action” is, day time is when you practice finishing moves, babalities, and combos. But this is 2019, not 1993…we’re old. Ok, I’m rambling…laters.

Betrayed in the Octagon

In December I got a new HD camera, Panasonic AG-AC30 with a built in led light. My old Sony hd cam was great but half way filming ‘Delirium Tremens’ the touchscreen LCD monitor went out, disabling my ability to manually change my settings (luckily, my stuck settings were set ok), but I kept filming with it including ‘Hank’. After doing some research I chose the Panasonic(which reminds me of a light weight version of the Sony VX2100 but HD, better mic, no tapes, etc) which was released around 2016. Excited to use it I started filming at Cream City with friends, made two edits, and decided to make one more…’Betrayed in the Octagon’

Betrayed in the Octagon from Gabe Chan on Vimeo.

For some reason, I always watch ‘The Color of Money’ every winter season. That inspired me to use the clip of Paul Newman mentioning Vincent and Vince Stranc starting the montage out (and of course I used a song from the film as well). That process got the ball rolling when it came to the montages in this edit.

I always wanted to use another track from PIL and I felt Taylor (tavis), Josh, Stemper, and Rock went well with the track ‘Swan Lake’. *I filmed Josh do a half cab heel on the pyramid three times but being the amateur that I am I must’ve erased it somehow trying to figure out the new Panasonic capturing Final Cut Pro process. I was bummed out about it naturally just like any other filmer but he later said “ahh, no one wants to see that”. I immediately felt better haha.

And finally Gag, Sleepy, and Max (honestly, I didn’t think he’d be skating that soon after brazzing his hand washing dishes) go well with Wu at Cream City. Ever since Wu-Tang Forever came out I wanted to use ‘Cash Still Rules/Scary Hours’. The song wasn’t long enough so I mixed in some Tical in there…

Bill Kaschner is the main reason Cream City is there and why it’s the greatest place on Earth. So I used some clips of him shredding during the early stages of cream to the present. And of course Stella completes the whole package deal.

Okay, gotta go…I’ve been watching ‘Sicario’ while typing this post. Benicio is about to get his revenge…adios amigos!

“My toe nails are too long”