We’re coming up on the 20th damn anniversary of this website real soon. I’m not quite sure how to celebrate such a thing, but a rehash of our web clips from the past comes to mind. A lot of these clips, especially the earlier ones, have never been on the internet in high quality. Think 320×240, super high compression, long download times.

My original idea was to begin as far back as I could go, and also dig up photos and other related memorobilia that could pertain to the video at hand. Unfortunately the earliest videos were also filmed when photos were shot on film, and I’m definitely way too lazy to try to dig through that stuff and try to discover the so called photographic gold.

The earliest clip that was made after digital still cameras came into my life was from April 2006. Mini Video 33 – Brigitte. Filmed on a Canon GL1. Edited on a PC program called Ulead Video Studio Pro, which I remember being like a half assed copy of Final Cut Pro. This was the first time I used French pop music from the 60s, which has turned into one of my most predictable editing moves over the years. The song is by Brigitte Bardot, which explains the mysterious(?) title of the clip.

This video is actually a really bad example of what I’m trying to accomplish with this series of web posts, let me explain.

In January 2003 we premiered my first full length video “Hurry Up and Die”. Instead of calling it a day and putting out the video as it was (I even had the VHS box artwork in hand!), we decided to keep filming and upgrade the video with better clips. In retrospect we fucked up, no end date was chosen, so there was no way to know when this improved version of the video was finished.

Eventually, it was already years past the premiere and obviously “Hurry Up and Die 2.0” would never be done, so I decided to dump the clips onto the web. That makes this video a “greatest hits” of the clips filmed after the premiere of “Hurry Up and Die”. I kind of question how or why I chose the clips I chose, it seems like they range from 2003 up to 2006, which is when this clip was created. There really doesn’t seem to be much rhyme or reason to it. I think a couple of the clips were even in one of the “Beez” videos.

All those words later, my point is, I don’t exactly have photos that match up with the things portrayed in this video. I dug through the hoard as well as I could. Some of these finds make some sense, some are a stretch. I did my best. 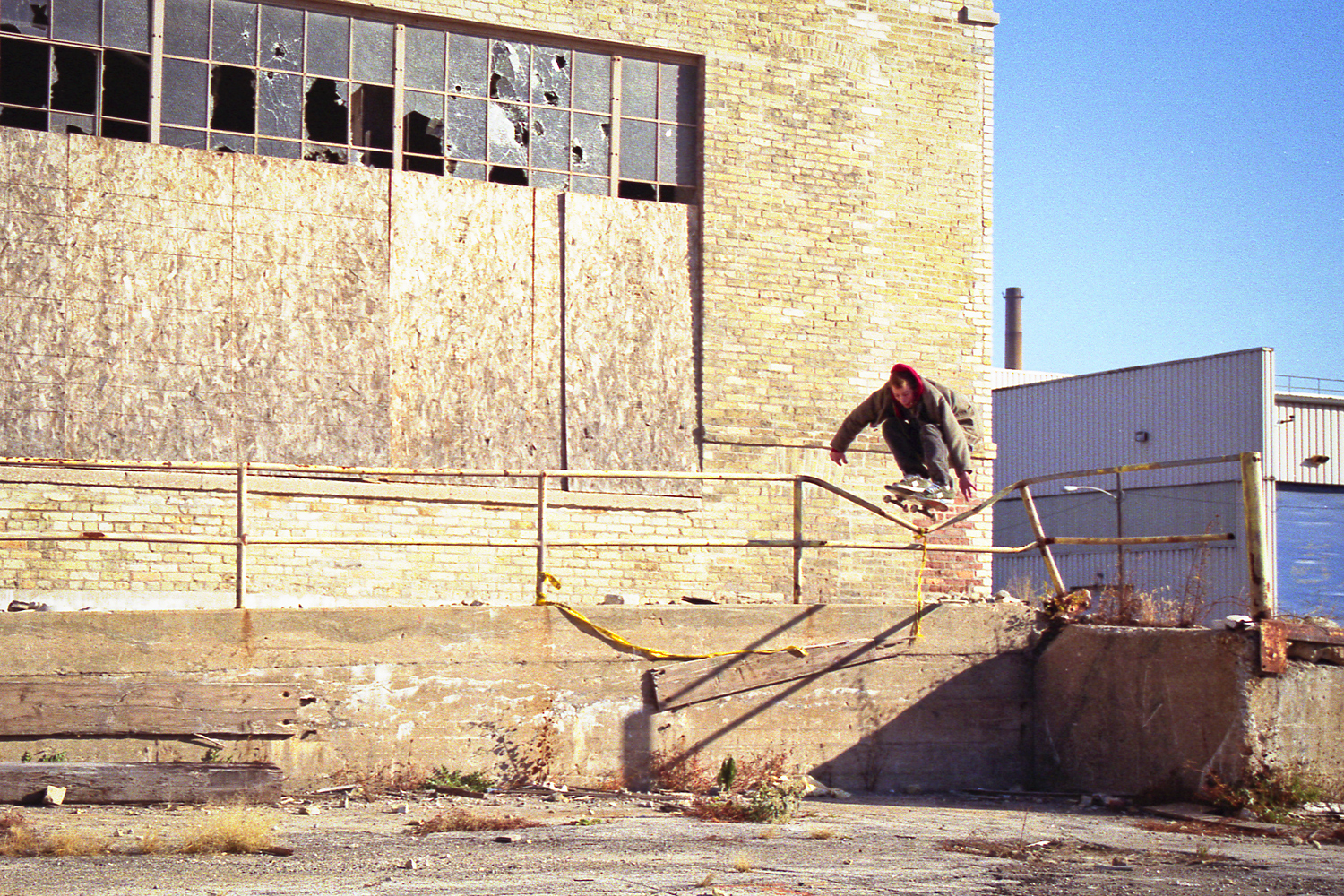 Ben Vance – Ollie. Shot on set during the creation of Hurry Up and Die 2.0. The video shows a 180, the photo an ollie. I think Pat Forster filmed the clip while I shot the photo. I don’t recall footage of the straight ollie existing, but my brain is no longer working so well, it might exist.

This was the worst spot ever. Ben is popping his ollie off of some crappy sheets of plywood he threw over the unskateable run up. 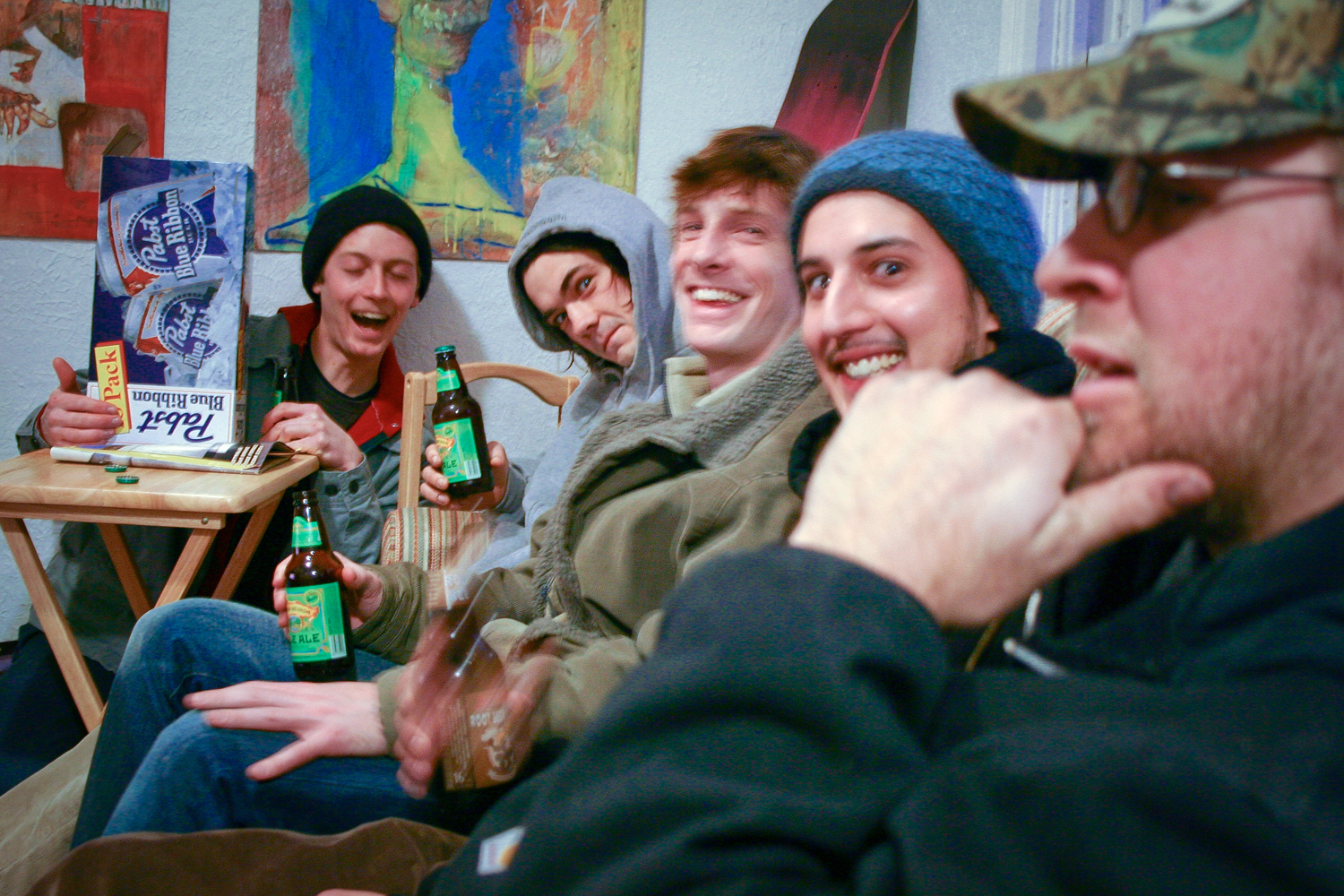 The crew! Ben, Rock, Willy, Aaron, Nate.  All key members of this video production.  I believe here we were watching some sports.  A pretty uncharacteristic thing to be doing at my house.  This was the GAME ROOM, for gamers only.  At this moment in time I think everyone in this picture lived within a few blocks of each other.  Less travel for maximum shred. 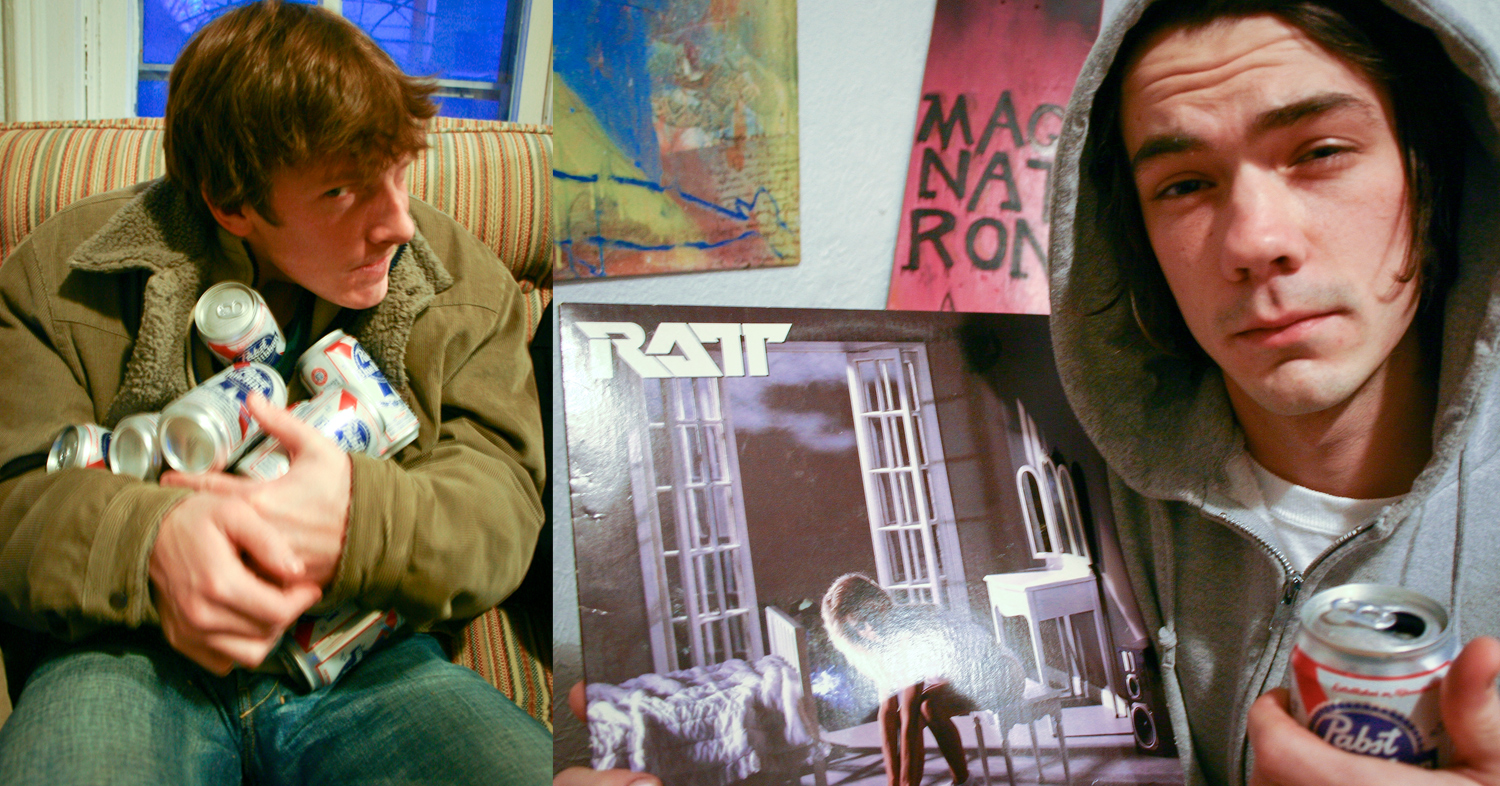 The Beer Goblin vs the Yooper Ratt Aficionado. 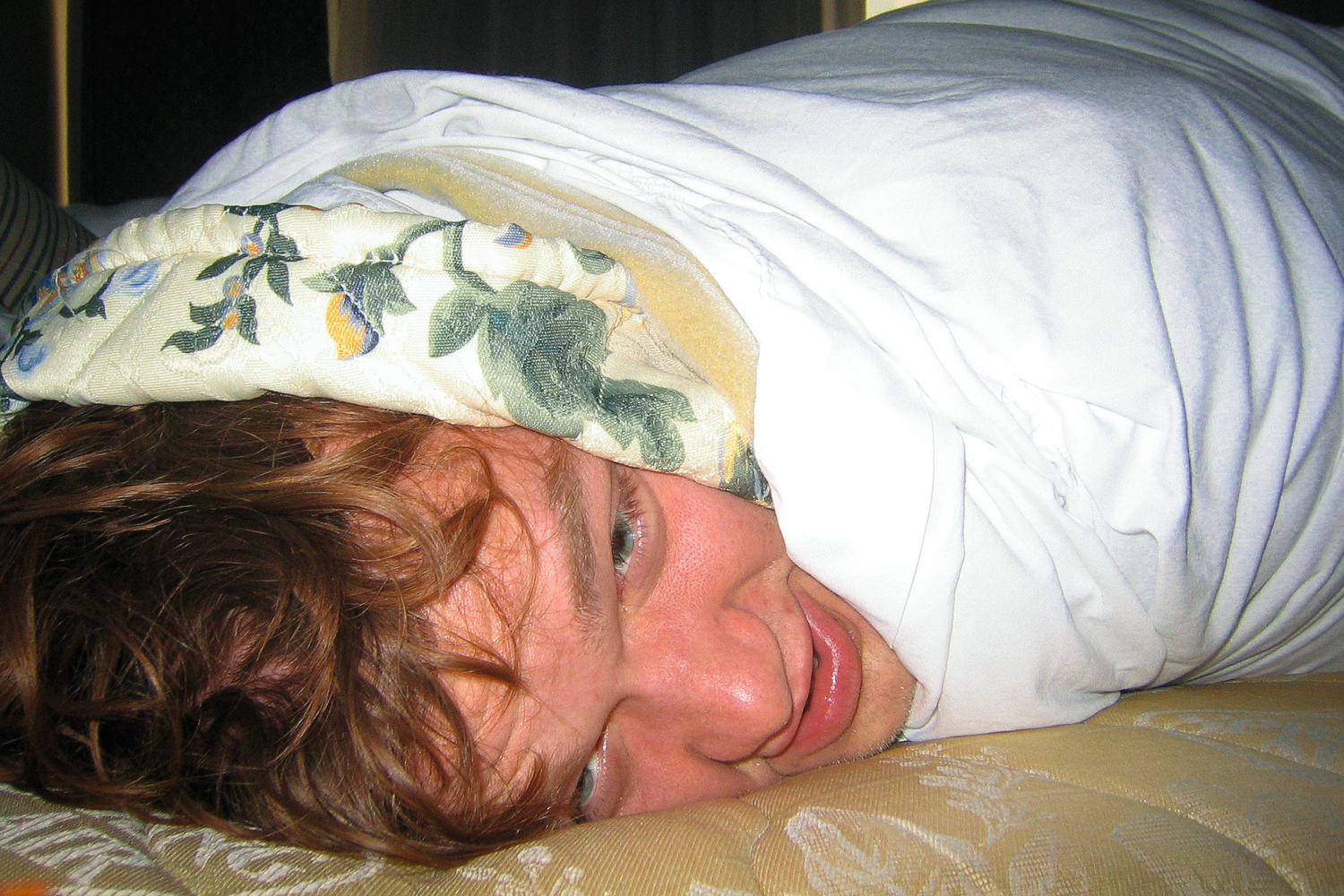 Jeff Bauman. He was the young maniac back then. Never afraid the “duh heck!” himself onto a rail. Pictured here wrapped up like a burrito, looking somewhat shell shocked. I don’t know what was going on at the time. Photo was taken in Tampa, where the nollie 180 down the 10 stair was filmed. We were down there for a skate trip in January 2005. 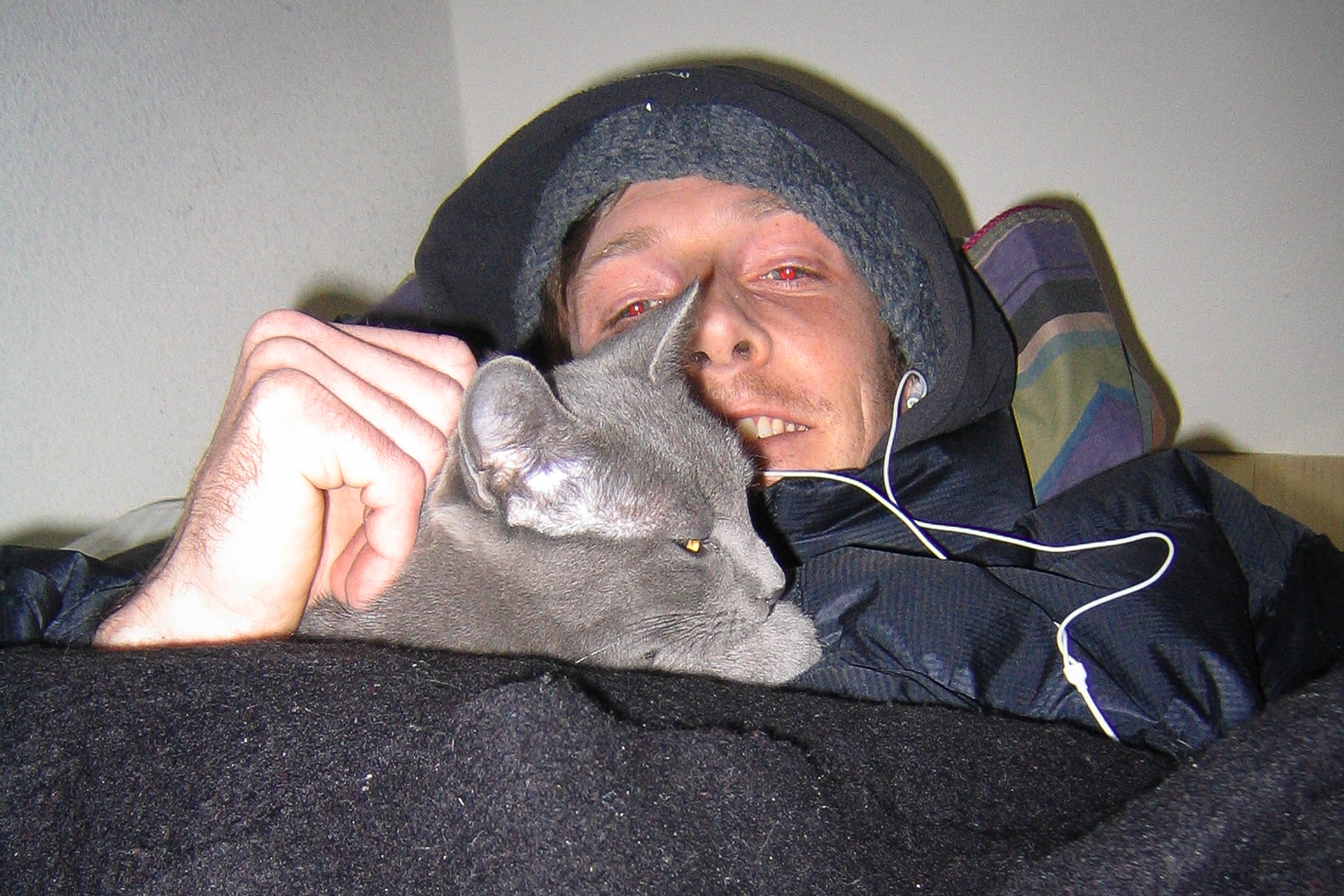 Same trip. Everyone got sick. I remember sleeping in a dorm in an old train station. Everyone already got all of the good blankets. I ended up with six sheets. Bill was nursed back to health by this cat and his first generation iPod with 1 gig of storage. This photo also has a burrito vibe. I’m hungry. 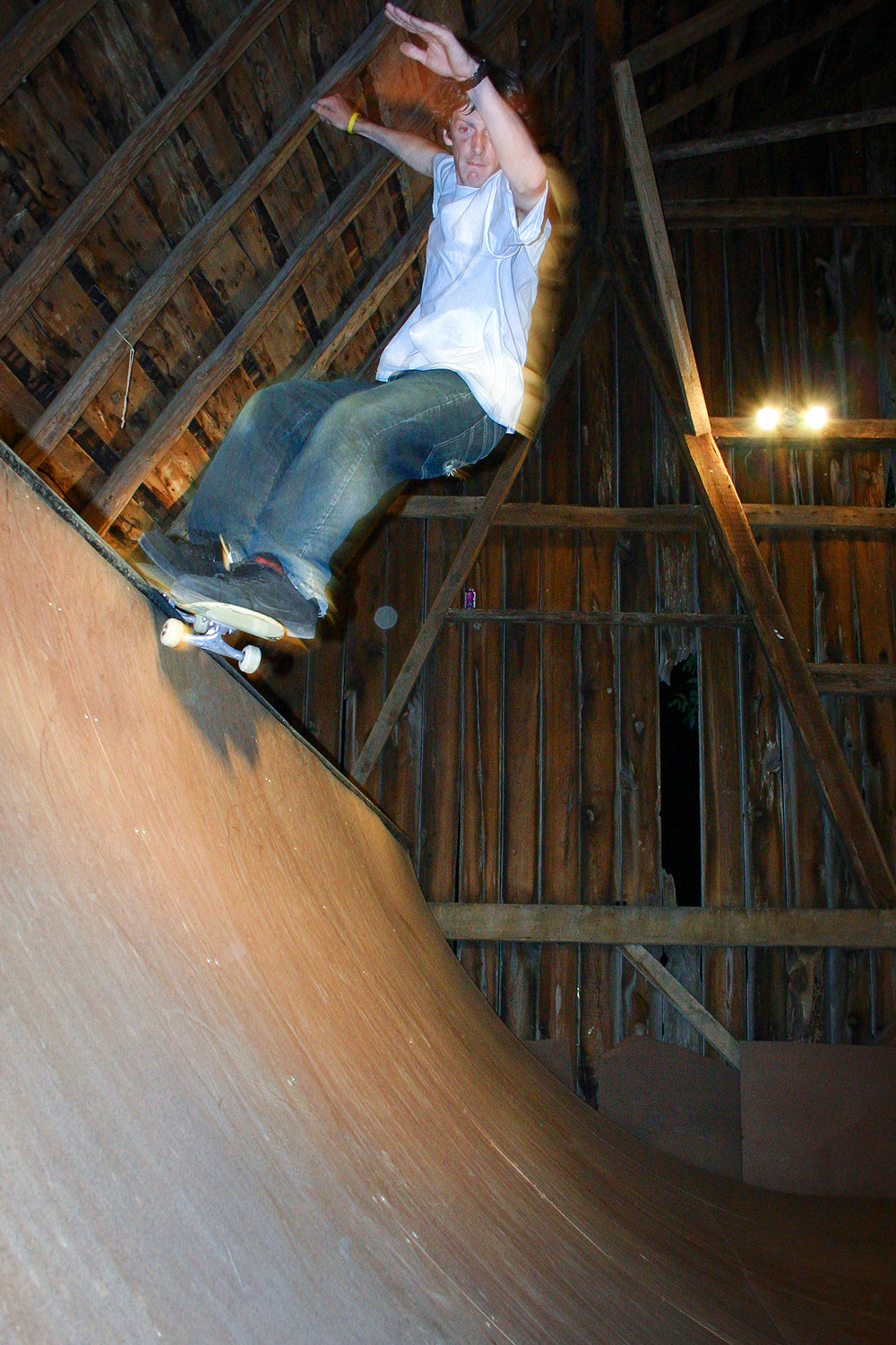 Uncle Willy – Smith. A session at this ramp is featured in the vid. The ramp was in a barn at the Van Housen brothers’ house near Thiensville WI. It was a rad set up with rad vibes. Reason: the barn was filled with cats. Later on, this ramp was recycled into other obstacles at Cream City. I think it was turned into the old banked manual pad with parking blocks on it.

First trip to NYC, 2004(?). The big spiel about the easy availability of digital photos and what not at the beginning of this post was a slight lie, as I just dug out some pics from this trip and they were shot on film. The video had a line we filmed on this trip. Pat Murphy once told me he learned how to do varial heelflips by watching how Ben does them in the clip. I always was kind of bummed how I filmed the line, but Ben’s cool moves more than make up for my failings in life. 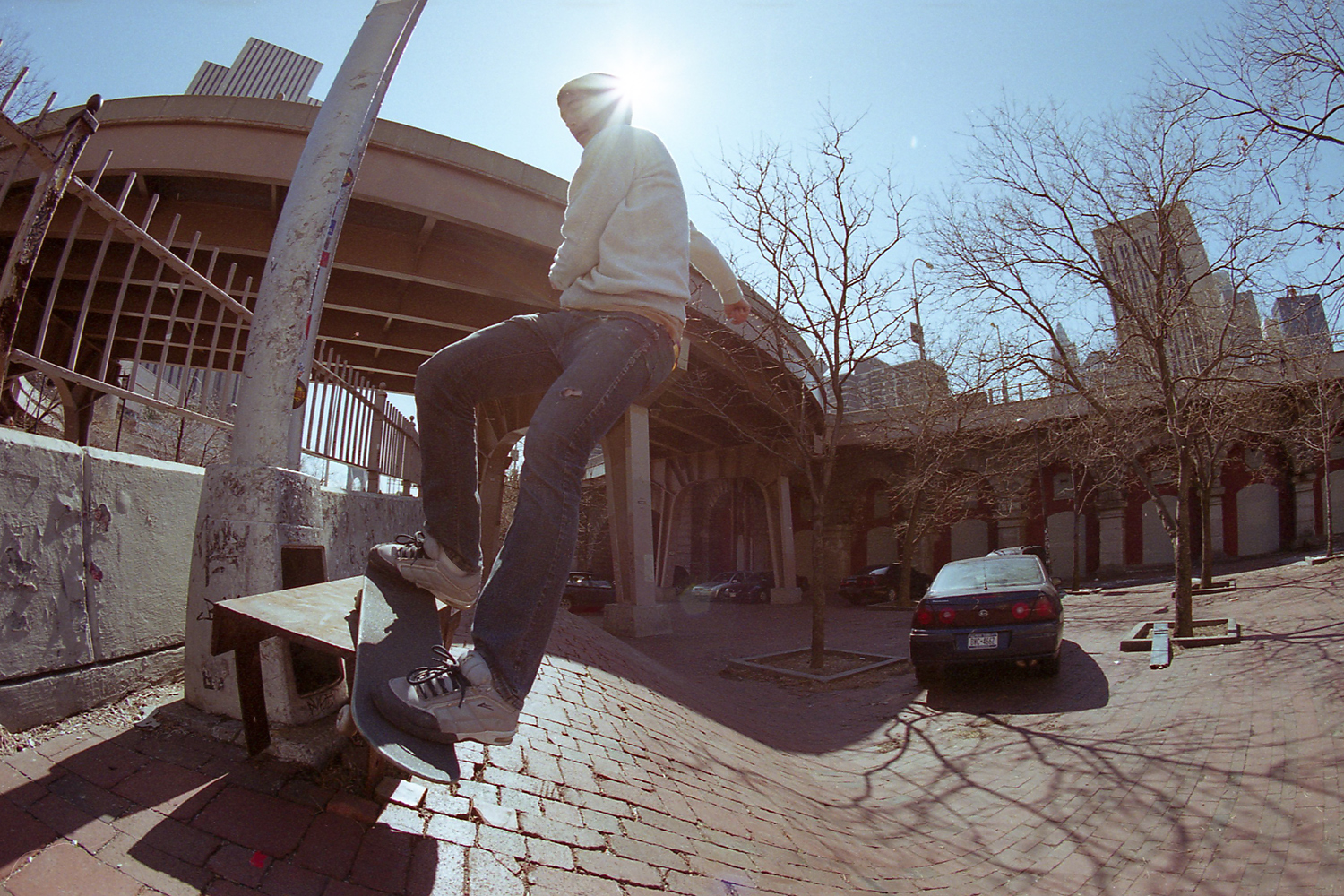 Ben Vance – Smith. Same trip. I could be remembering this wrong, but I think for some reason we drove through to night to make it to New York. Without ever sleeping, first spot of the day, Brooklyn Banks. Awesome to see in person for the first time. Top banks shut down pretty soon thereafter(?). This photo was on this site ages ago, I’ve always liked it. I had bought the fish eye this was shot on right before this trip! (Canon 15mm). I still use this lens to this day. Great return on investment. 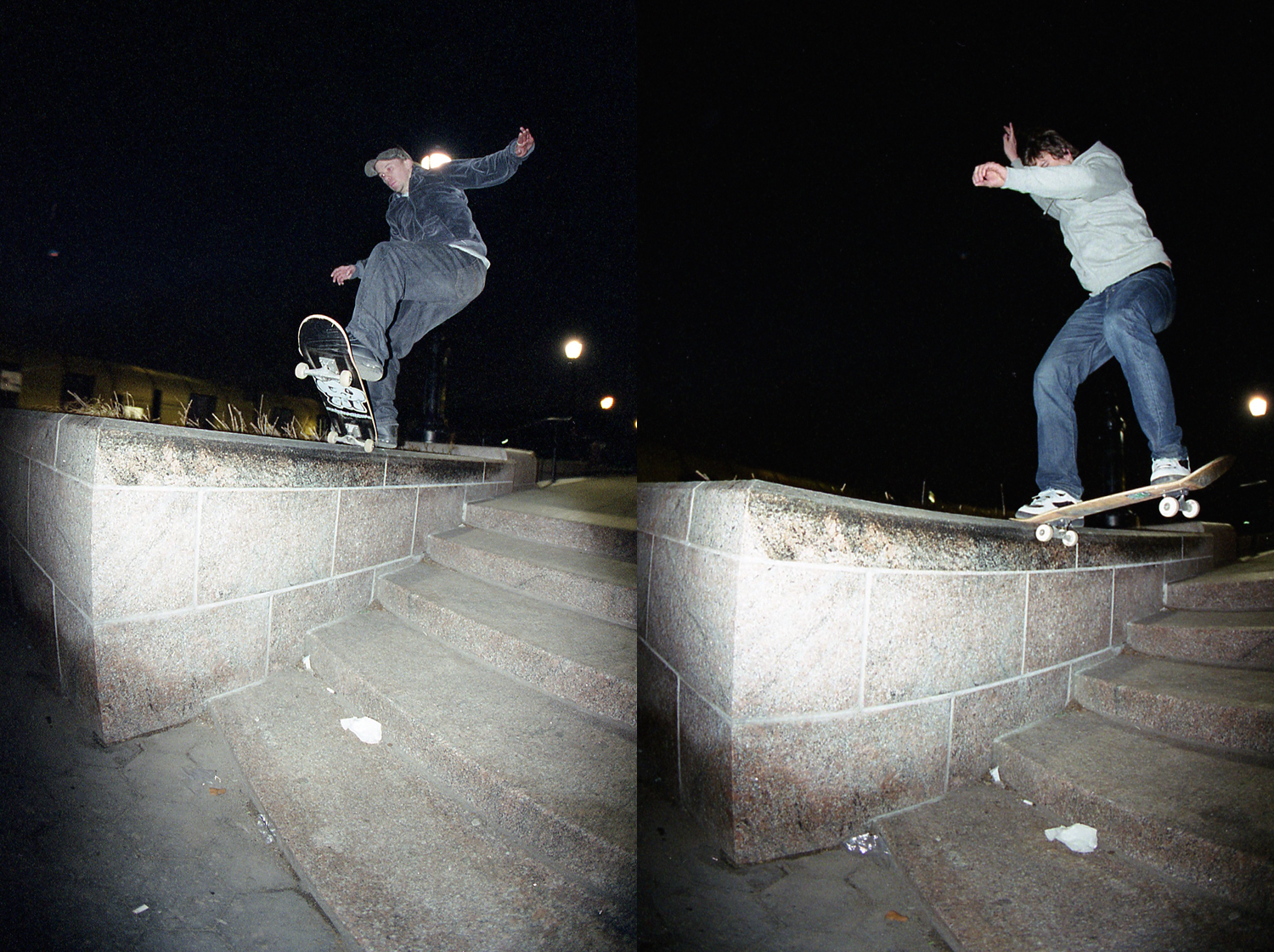 Finally, two unreleased rarities of Pat and James. Battery park at night. On camera flash. They kind of turned out alright, but my prints were messed up. These new scans are the first time I’ve really even been able to see these photos. Also, I had just got this fish eye. Did I mention that? Did I maybe shoot every photo on this trip with it? I wonder why I did not film these tricks. Maybe my battery for my camera light was dead. Times were tough back then, keeping those things charged.

That’s it for now, until next time.