Editor’s note: We welcome Steve Green back to the fold. In 2003 when technology finally offered us the ability to have people from near and/or far post on the site, he was one of the first.  For his first new post I asked him to make a playlist of his 10 favorite songs from skate videos. ~Josh

Editor’s note 2: If you tried to play this when it was the Spotify playlist, sorry, we’re stupid. The Mixcloud link above will work now. Apologies, Jah bless.

Ned’s Atomic Dustin – Grey Cell Green
What a jam – Rick Howard – ahead of his time.  All time.  Best style.

Morrissey – Speedway
Still get goosebumps when Speedway is paired with Heath.  So magical.  Morrissey skate craze was at a fever pitch in 2008/9 when I was living in NYC. This moment put the final stamp on it.

Bauhaus – Dark Entries
Karsten skating to Bauhaus for the ender of Chronicles 3 – whoever decided on that deserves a raise.  Phenomenal.

Talking Heads – Once in a Lifetime & Artifacts – C’mon Wit Da Git Down
Eastern exposure 3!  No single video had a bigger impact on the way I skate. Both the Talking Heads and Artifact, within 3 seconds of hearing those songs will send any skater of the era right back.

Sonic Youth – Catholic Block
I was around 10 when I got a copy of Streets of Fire.  The entire soundtrack is SST records which was pretty amazing for a 10-year-old hearing punk for the first time.  I was blown away in many directions.  I also thought the music was completely silly, not even really thinking of it as music.  I didn’t have a punk epiphany at 10 or anything, but Turf was my skatepark.  So as I got older and into music, going back and hearing Catholic Block at the Turf, cmon, so sick.

Casual/Del – A Little Something
Virtual Reality might be my favorite video of all time – aside from punk, being exposed to bay area hip hop was the best.

Royal Flush – Worldwide
Keenan and Gino. I say no more. 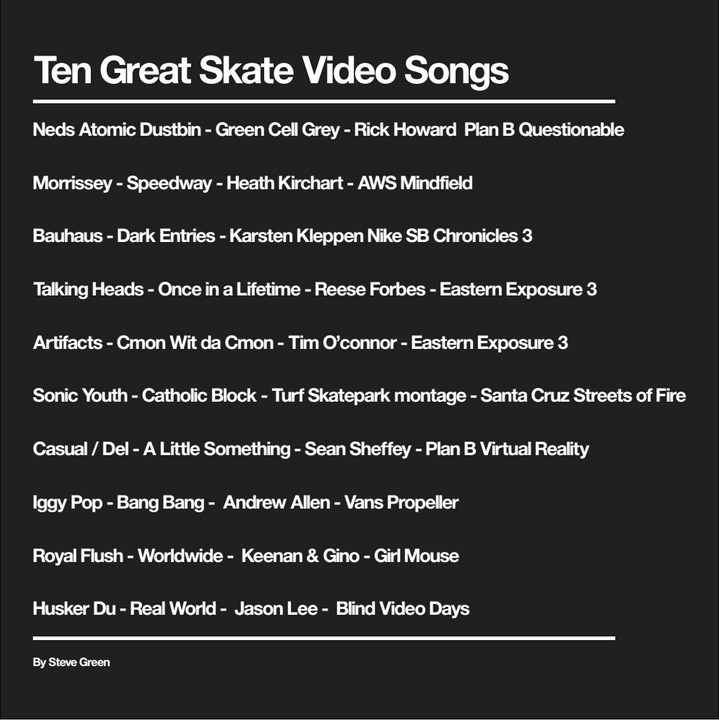